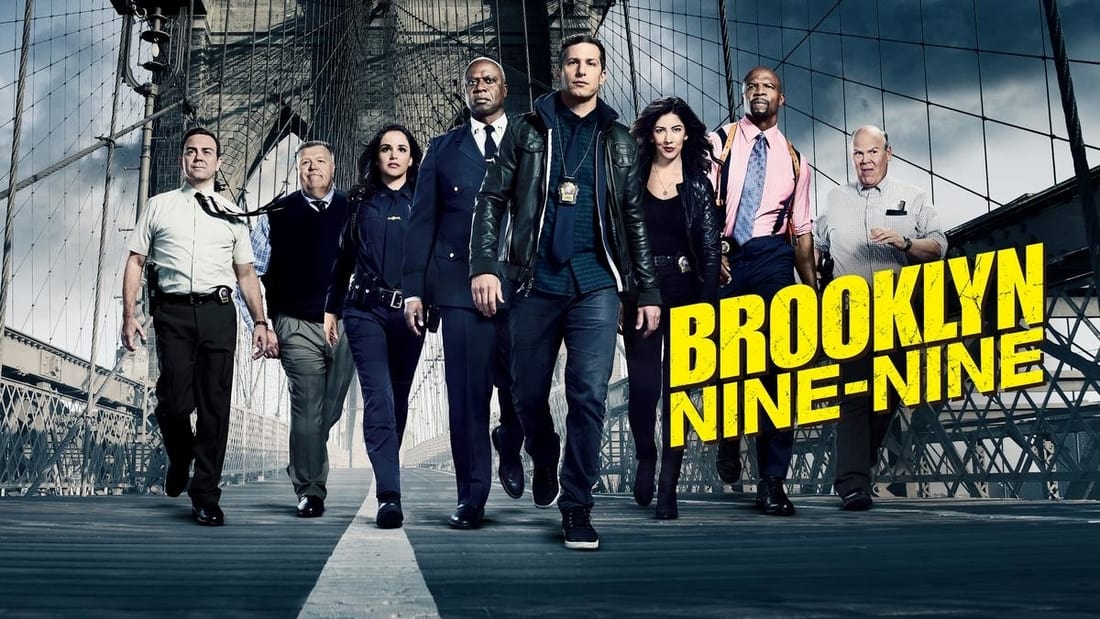 You have the right to remain…laughing—because the detectives of Brooklyn’s 99th precinct are back for one last hilarious season.

It’s been over a year since the hit NBC series Brooklyn Nine-Nine last graced our television screens in April of 2020, and fans can’t wait to see what the new season will bring for Jake (Andy Samberg), Amy (Melissa Fumero), and the rest of the 99 crew.

For those of you heading to Hulu to stream the final season, we’re here to break down everything you need to know. Plus, we’re sharing some of our favorite, rewatchable moments from the show (because, let’s be honest, we can’t wait to go back and binge from season 1).

Buckle up, because we have a feeling we’re in for the most cool, cool, cool season yet—and you don’t want to miss it. 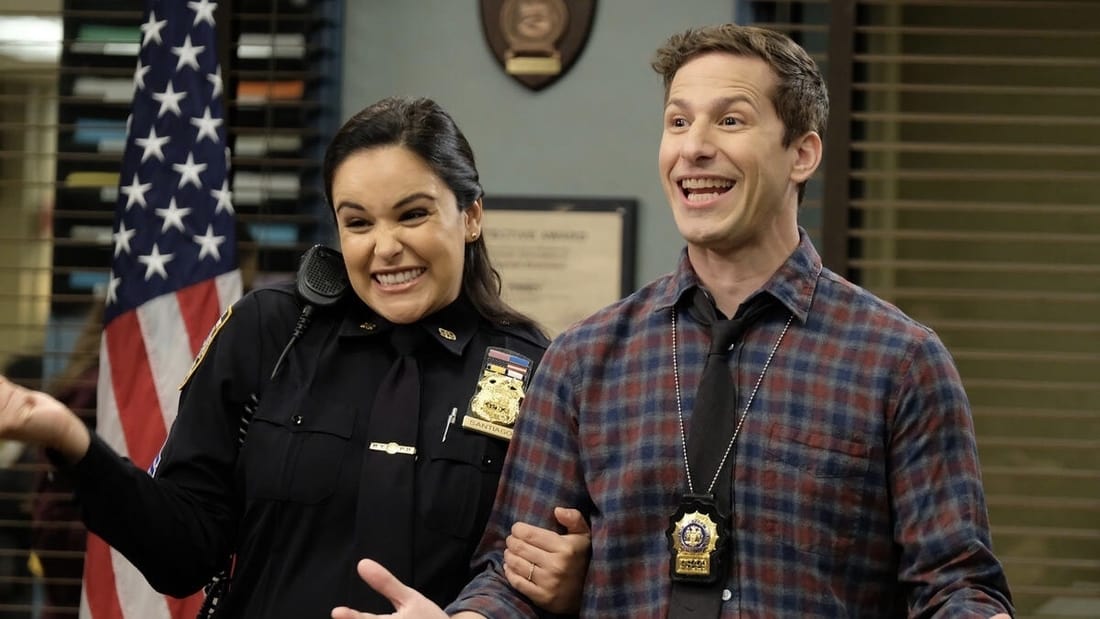 As each of the ten final episodes air on NBC, they will be available the next day to stream on Hulu, so fans will be able to stream the first two episodes on Friday, August 13.

What to Expect from the Brooklyn 99 New Season 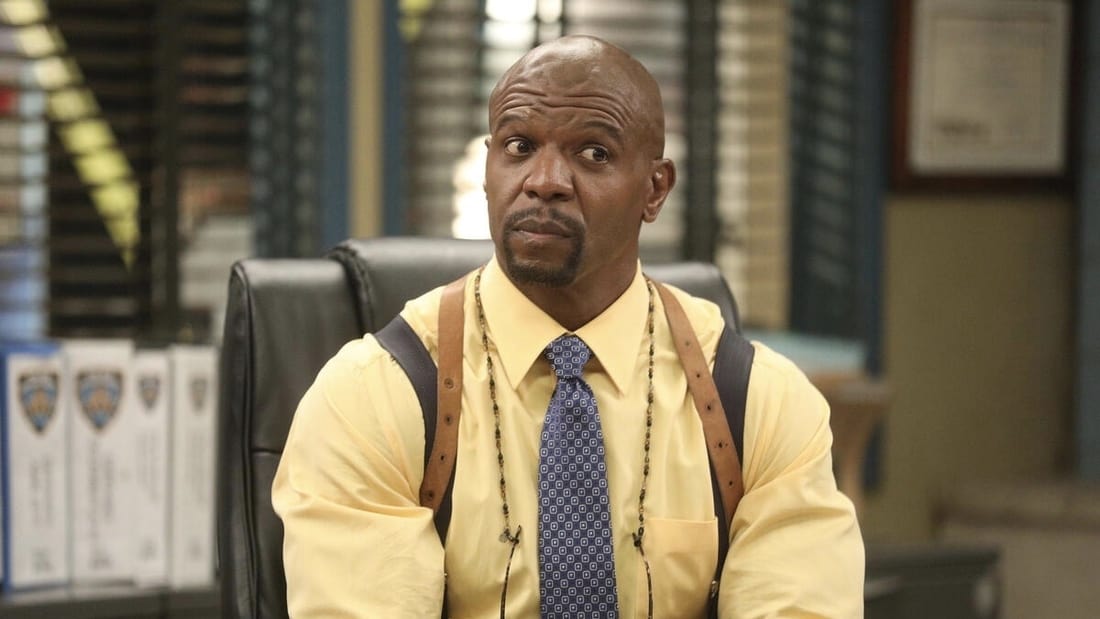 Terry Crews, who plays Lieutenant Terry Jeffords in the sitcom, told Access Hollywood in June 2020 that episodes for the new season were scrapped following protest activity around the country, leading fans to speculate that the new season will address issues relevant to race and equality.

Season 8 is also expected to pick up with Jake and Amy learning how to navigate parenthood for the first time.

How many seasons of Brooklyn 99 are on Hulu?

Following the season 8 finale, airing Thursday, September 16 on NBC, the series will be available to stream in its entirety on Hulu (beginning on Friday, September 17).

Sadly, yes. Season 8 will be the final season of Brooklyn Nine-Nine.

Luckily, you can fill the void by rewatching the series, or by discovering similar sitcoms on Hulu. To ease the transition, we even included some titles starring the Brooklyn Nine-Nine cast. Keep scrolling to see our list of recommendations. 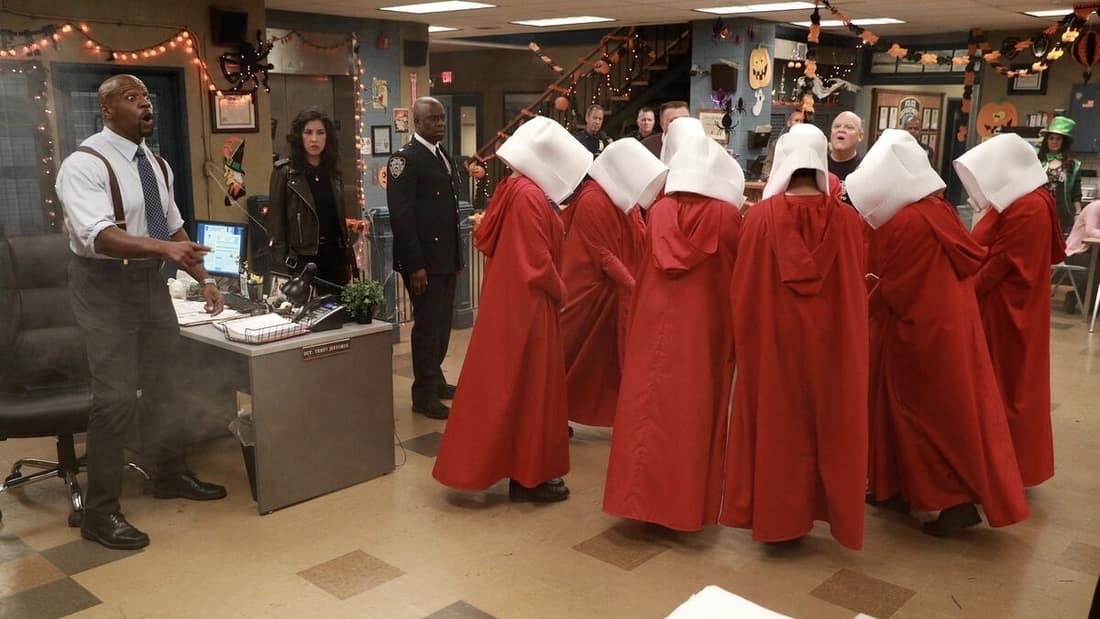 What’s the best way to cope with your favorite show ending? Rewatching it from the very beginning usually does the trick for us.

Check out some of our favorite Brooklyn 99 episodes, like the precinct’s epic tribute to The Handmaid’s Tale (S5 Episode 4)—it’s one of our favorites, for obvious reasons.

S3 Episode 10 ‘Yippie Kayak’: All the Die Hard references come to a head. Amy tries to prove that she’s as tough as Rosa and Holt. Terry must leave his Christmas Eve celebration to save Jake, Charles, and Gina from a very Die Hard situation.

S5 Episode 4 ‘HalloVeen’: The 99 embarks on its fifth annual Halloween Heist and, as usual, everybody has a plan and no one is safe. A pretty important proposal also happens.

S5 Episode 15 ‘DFW’: Jake invites his newly discovered half-sister to stay with him in New York. This is also affectionately known as the Brooklyn Nine-Nine ‘I Want It That Way’ episode. 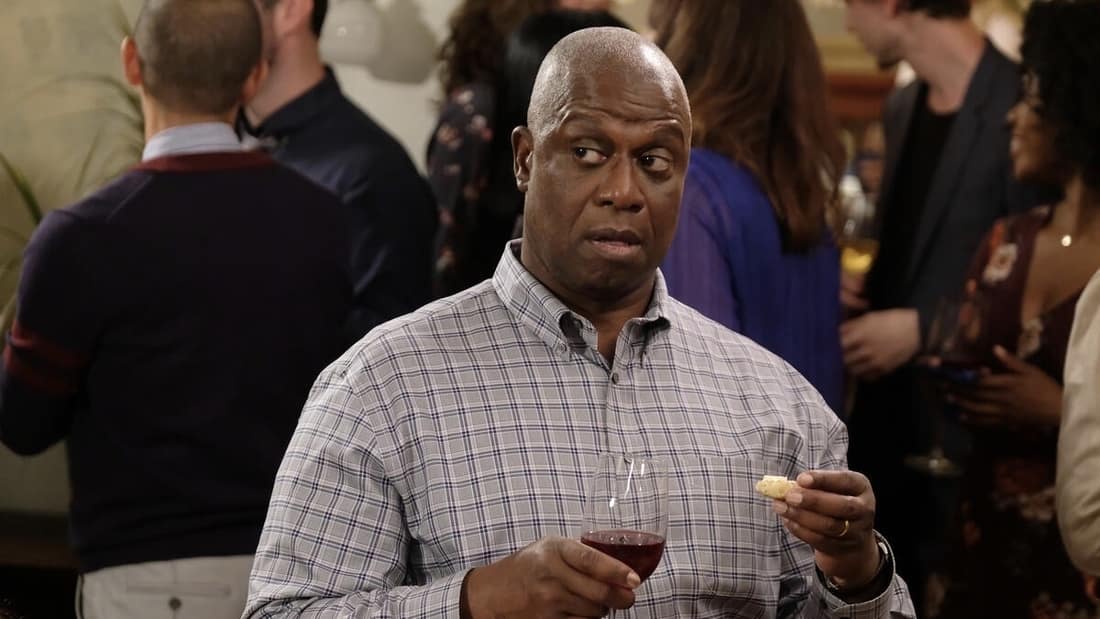 S2 Episode 2 ‘Jake and Sophia’: Holt delivers his first ‘hot damn!’ Jake discovers the woman he hit it off with at the bar is the lawyer representing a perp he’s trying to put in jail. Gina and Charles try to leave their relationship in the past.

S3 Episode 2 ‘The Funeral’: Holt delivers the ‘everything is garbage’ speech at Captain Dozerman’s funeral after having a heart to heart with Terry. He also delivers a personnel change that could threaten Jake and Amy’s burgeoning relationship. 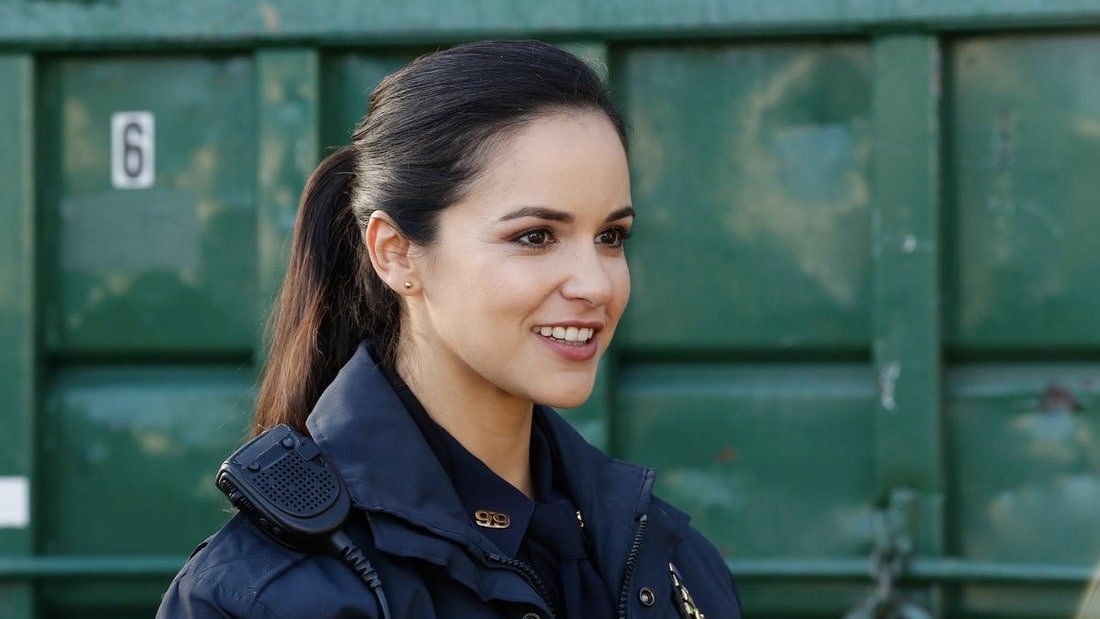 S3 Episode 5 ‘Halloween III’: Holt and Peralta compete for the title of amazing detective slash genius in their third annual Halloween heist. To everyone’s surprise, Amy earns the title of “Queen of the Nine-Nine.”

S5 Episode 15 ‘The Puzzle Master’: Amy becomes the first female sergeant in the district’s history. Jake surprises her with an investigation into a string of arsons connected to her favorite crossword puzzle author, Vin Stermley (guest star David Fumero). 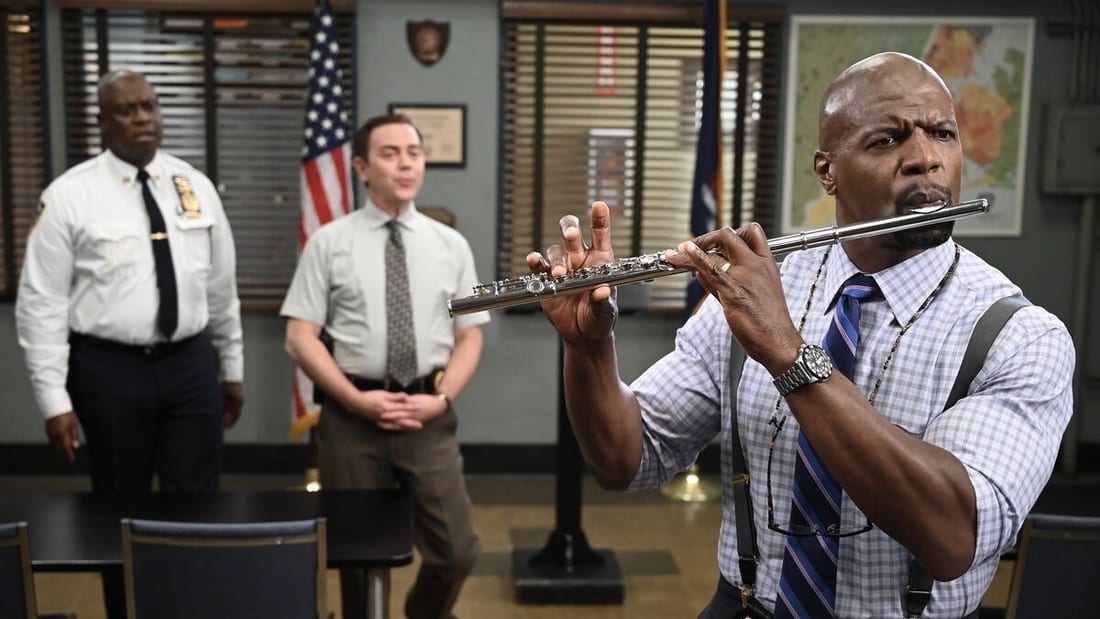 S1 Episode 3 ‘The Slump’: Fans meet ‘scary Terry’ for the first time. Jake starts accumulating unsolved cases, and the other detectives worry his losing streak will rub off on them. Boyle helps Sgt. Jeffords with a case.

S2 Episode 5 ‘The Mole’: Terry and Rosa go to a silent disco while searching for new leads for their drug task force. Holt and Jake need to root out a mole in the precinct before Deputy Chief Wuntch hears about it. 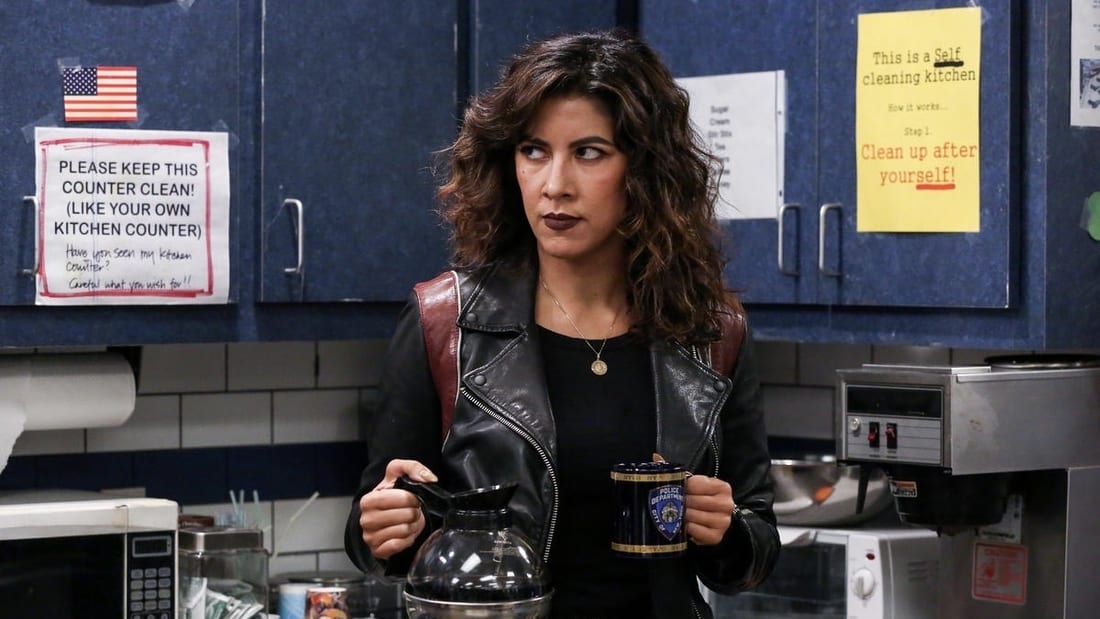 S1 Episode 19 ‘Tactical Village’: Rosa is mad when Charles doesn’t invite her to his wedding. All the regional precincts compete in a mandatory training course. Amy runs into an officer she used to date.

S3 Episode 20 ‘Paranoia’: Rosa asks Jake to help change Terry’s mind about her new relationship. Adrian Pimento suspects someone from his past is out to get him.

S5 Episode 10 ‘Game Night’: Rosa comes out to the precinct, and asks Jake to help her break the news to her parents. Her plan is thrown off when they wrongly assume the two are dating.

S2 Episode 3 ‘The Jimmy Jab Games’: Gina hosts the ‘Jimmy Jab Games’ to keep the precinct busy while they wait for the Serbian president’s motorcade to arrive. Terry and Holt take on a new drug task force.

S2 Episode 17 ‘The Boyle-Linetti Wedding’: The whole squad is given a job to do for the wedding ceremony for Gina and Charles’ parents, but a criminal distracts Amy and Jake.

S6 Episode 4 ‘Four Movements’: Gina plays a high-stakes game of chess with Captain Holt. Rosa and Amy take Gina out for a fancy brunch. Jake and Gina must use their wits to infiltrate a posh club.

We love a workplace sitcom just as much as the next person. Check out titles similar to Brooklyn Nine-Nine, like Scrubs, Superstore, and Younger. Plus, be sure to stream the Hulu Original movie Palm Springs, starring Andy Samberg, only on Hulu.