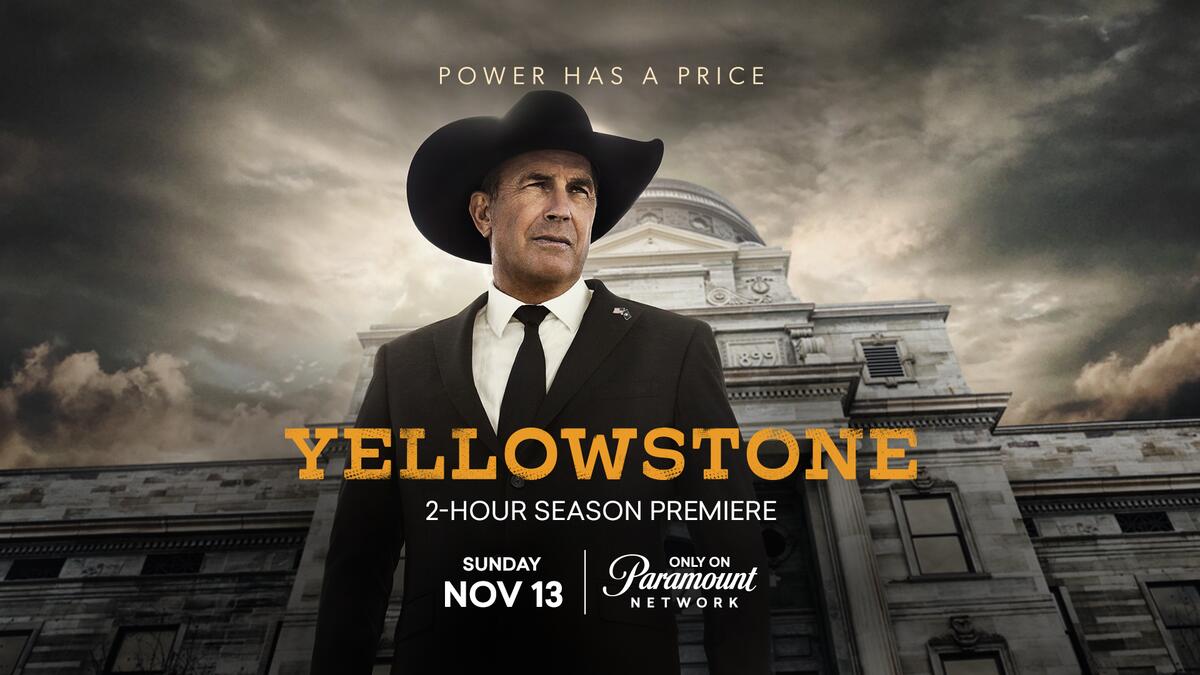 Put on your cowboy boots and get ready to saddle up. After a jaw-dropping season 4 finale, Kevin Costner and the rest of the Dutton family finally return to the ranch for season 5 of Yellowstone on Sunday, November 13.

Wondering how to watch Yellowstone without cable? Whether you love the show for its majestic north western scenery, the Americana country soundtrack, the dysfunctional family dynamics, or the adrenaline-rushing drama—we’ve got you covered.

The next episode airs Sunday, November 27 at 8 P.M. EST on the Paramount Network. Watch it live with a Hulu + Live TV subscription.*

Yellowstone returned for season 5 with a two-hour premiere on Sunday, November 13 at 8 P.M. EST.

How to Watch Yellowstone Live Without Cable on Hulu

Season 5, Episode 1: One Hundred Years is Nothing

Season 5 of Yellowstone starts with John winning the Montana gubernatorial race set in motion at the end of season 4. While we already knew the only reason John would ever consider becoming governor is to protect the ranch, he continues to make his intentions abundantly clear behind closed doors after winning the election.

The change in office puts a wrench in Market Equities tourism plans. Their only hope at taking down the Dutton family is to tear them apart from the inside by targeting the family’s weakest link—Jamie.

Kayce continues his duties as Livestock Commissioner handling an issue at the Canadian border when Monica goes into labor back at home. She decides to drive herself to the hospital with Tate in the passenger seat when an intense contraction takes her focus off the road, causing them to collide with an oncoming truck and a stray buffalo.

The episode concludes with the entire Dutton family at the hospital. While Monica and Tate escape the crash alive, the baby they named after the family patriarch only lives for an hour after birth. Devastating loss strikes the Duttons yet again.

Season 5, Episode 2: The Sting of Wisdom

John throws all of the tasks, traditions, and formalities of the office out the window, especially those that stand in the way of protecting the Yellowstone ranch. Together, John, Beth, and Jaime decide to make a move against Market Equities by canceling state funding for their development project despite their standing lease agreement with the state.

Back at Kayce’s, Monica is home and healing, but the entire family is still deeply grieving. Monica decides to plan a funeral for baby John, and she wants him buried at the ranch so they can always visit him.

Carter, the young orphan Beth and Rip unofficially adopt in season 4, is all grown up and learning the ways of the ranch. Rip and the other cowboys decide to take him out riding on John’s horse. All is going well until Carter’s horse steps into a badger hole, breaking its leg beyond repair.

Ryan and Colbie get tasked with hunting the pack of wolves that have been killing cattle at the ranch. Despite possessing the necessary permits, the late-night hunt made it difficult for the cowboys to see the National Park GPS tags before killing them. Killing government-tagged wildlife is a serious crime, creating a potential PR nightmare for John’s first few weeks in office. That is, unless Rip can successfully create a cover up.

Market Equities’ attorneys, Sarah and Ellis, start their plan of infiltrating the Duttons from the inside by using Attorney General, Jamie Dutton, as their pawn.

After the loss of his newborn son, Kayce comes to the realization that he cannot be livestock commissioner if he wants to be the husband and father his family needs. He turns his badge in to his father before exploring the ranch together in search of a final resting spot for baby John.

And as for Beth? She’s always up to something. This week, she took a giant step towards taking down Market Equities by selling her controlling interest in Schwartz & Meyer to Market Equities’ biggest competitor. And that’s not all—she also placed the family’s land in a conservation easement—rendering Market Equities useless in their pursuit of commercial land development.

Back in the bunkhouse, the cowboys are celebrating Lloyd’s 58th birthday (though the crew is convinced he’s closer to 85 than 58). Riding on the high of her big wins, Beth takes all the boys out to town for drinks at a cowboy bar despite Rip’s strong reservations against the idea. Per usual, Rip’s judgment was right. The night ends with a handcuffed Beth in the back of a sheriff’s car after starting a full-on bar fight after watching a hands-y woman flirt with Rip.

Beth is sitting in a jail cell after assaulting a California tourist at a local bar. Jamie comes to inform her of her options which are limited and out of Beth’s control. Of course, Beth doesn’t like that answer and pressures Jamie to stop the badly beaten woman on the steps of the police station and convince her to drop the charges. When he does so successfully, Beth begs Jamie to give her a ride home and once again caves into his sister’s demands, but forgets about the baby car seat in the back. No one in Jamie’s family knows about his son up until this point, and given Jamie and Beth’s turbulent past, Beth erupts with rage and vows to take his baby away from him.

Meanwhile at the governor’s office, John is confronted by even more Fish & Wildlife authorities regarding the missing National Park wolves. John sets up lunch with former governor Lynelle for some guidance on what to do. She recommends John hire an environmental advisor and conveniently reminds him that he now has the power of clemency which he uses to end Summer Higgens’ prison sentence from season 4.

Don’t forget about Market Equities. Sarah, the company’s lawyer, makes a small but huge move toward infiltrating the family from the inside by successfully seducing Jamie. Little do either Jamie or Sarah know that Beth had been keeping tabs on the pair all night.

After helping other nearby ranches with their branding season, it’s finally time for the Yellowstone Ranch to herd their cattle and complete their own branding. This entails a multiday horseback trip with the absolute bare minimum in terms of shelter, clothing, and food. The herding trip is a big deal, and a ceremonious one at that, which is why Beth, Kayce, Tate, Carter, all of the Yellowstone cowboys, the governor’s assistant, and the governor himself embark on the trip together at the end of the episode.

Before the crew rides off into the sunrise, episode 5 forces Beth to face a lot of her anxieties, especially ones that stem from her broken past including horseback riding and eating at the family dinner table. The latter, against John’s better judgment, turns into an explosive yet necessary moment between Beth and Summer.

The Market Equities storyline also continues in this episode, though only briefly. Jamie has another encounter with Sarah—this time at his office. Her intentions are to seduce him once again, but Jamie meets her with resistance. He counters her advances by telling her what they did in episode 4 is unprofessional and that he’s aware of what her motives are.

In an emotional sendoff to end the episode, the crew saddles up and rides off together to embark on their big herding trip, leaving Summer and Monica at the ranch.

When does season 5 of Yellowstone start?

Season 5 of Yellowstone premiered on Sunday, November 14 at 8 P.M. EST on the Paramount Network.

Where can I watch Yellowstone?

Hulu + Live TV subscribers* can watch Yellowstone live on the Paramount Network every Sunday throughout season 5.

How many episodes will be in season 5 of Yellowstone?

What time does Yellowstone come on?

New episodes of Yellowstone will air every Sunday at 8 P.M. EST throughout the season starting on Sunday, November 14.

If you love Yellowstone, you won’t be able to get enough of these similar series. 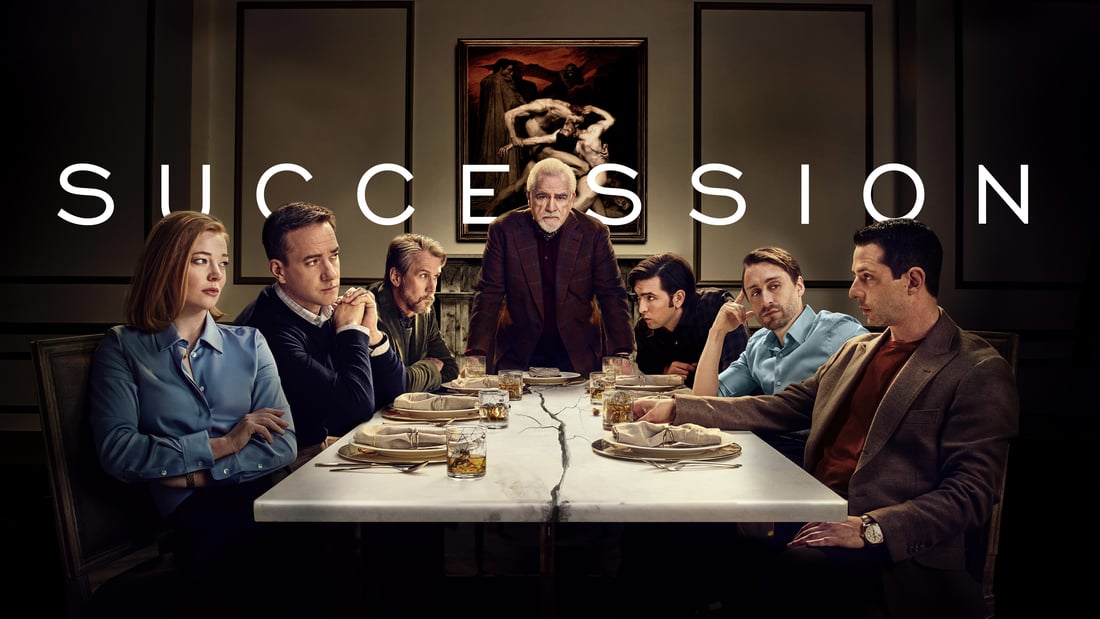 They’re the anti-heros you hate to love, the antagonists you root for, and the dysfunctional family you can’t help but feel for.

Like the Duttons, the Roys are a powerful family with a successful business and dark secrets. Let’s put it this way—they do what they need to do in order to stay on top. When the patriarch, Logan Roy, begins to experience a health decline, his four children find their own place within the company.

*Succession is available on Hulu with HBO Max® add-on subscription 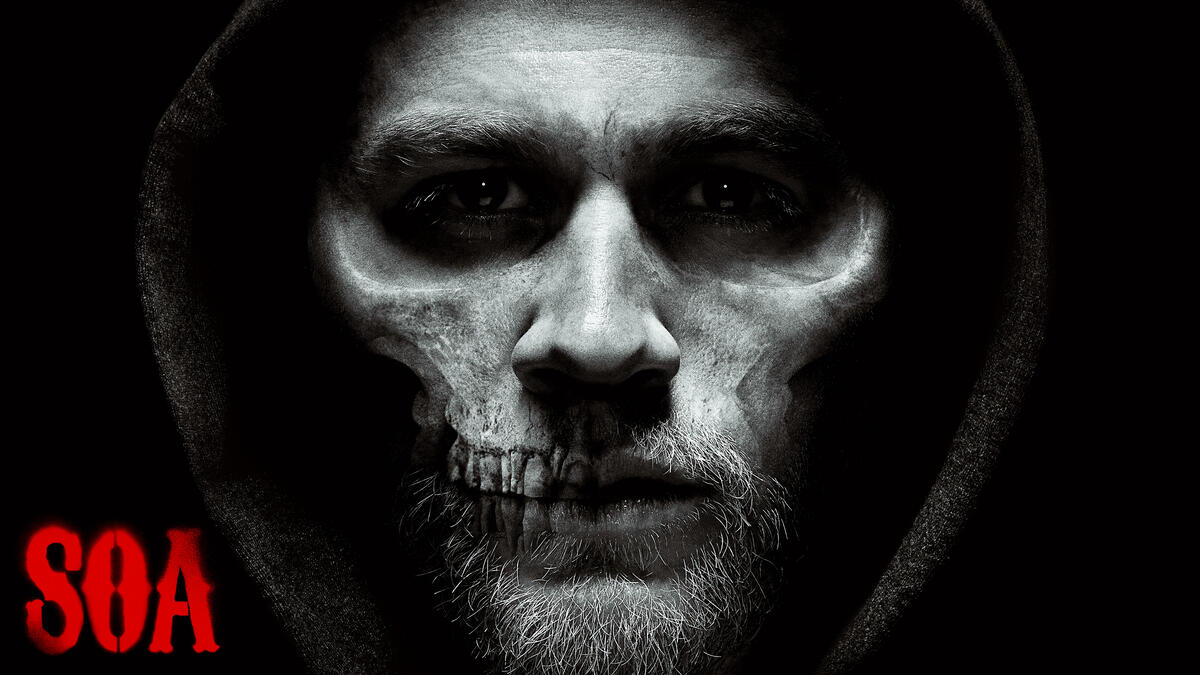 Though they’re not family by blood, the members of Sons of Anarchy Motorcycle Club share a tight bond united by the fight to keep control over their territory by any means necessary—much like the Duttons.

If you’re looking for another adrenaline-rushing show full of ruthless protagonists with dark secrets, Sons of Anarchy is a must-watch. 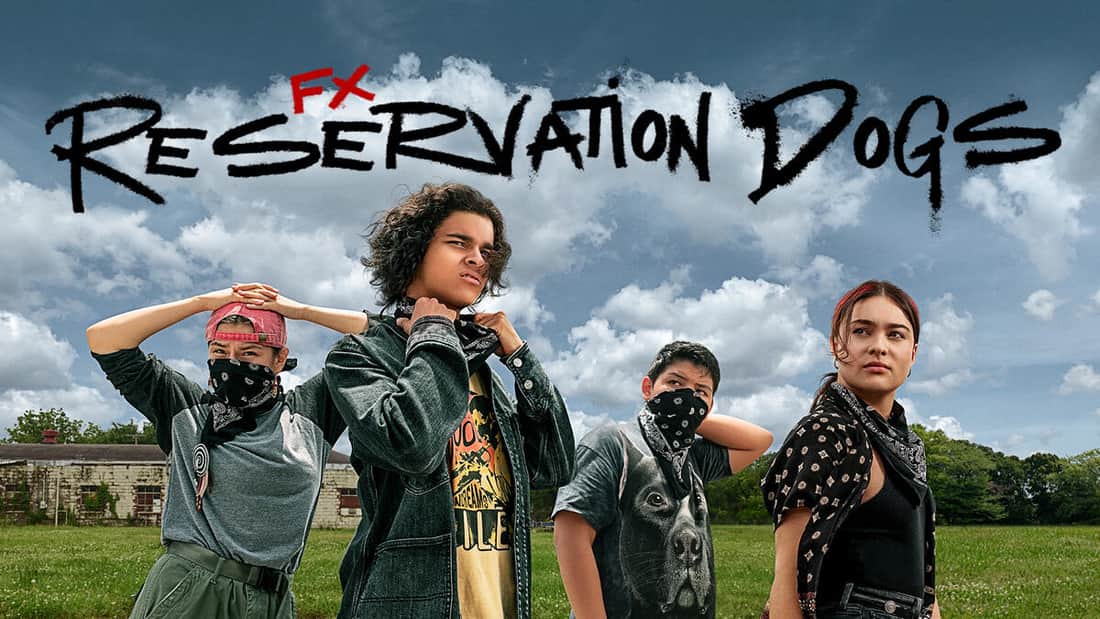 Weaved into the fabric of the Dutton family story is Yellowstone’s rich Indigenous history and the stories of injustice Native Americans face every day. Reservation Dogs is an FX dramedy series about the life of four Indigenous teenagers on an Oklahoma reservation, desperate to get out of the midwest for a fresh start in California.

Wondering where to watch Reservation Dogs? Hulu subscribers have access to both seasons available to stream now. 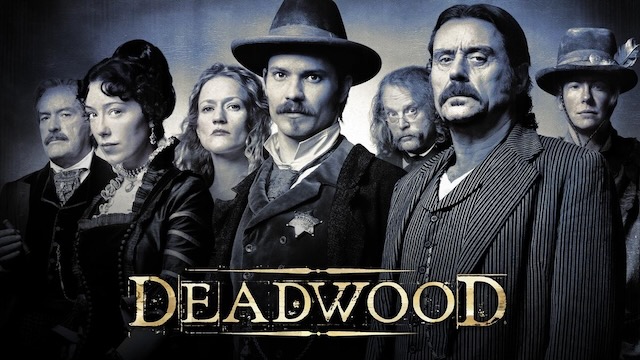 Set in the 1800s American West, Deadwood is a lawless gold rush boom town experiencing complete anarchy. If you can believe it, Deadwood is by far more violent than Yellowstone, but the similarities are clear. Other than being westerns, both shows feature characters struggling to navigate changing times, willing to do whatever it takes to maintain the only way of life they’ve ever known.

*Deadwood is available on Hulu with HBO Max® add-on subscription 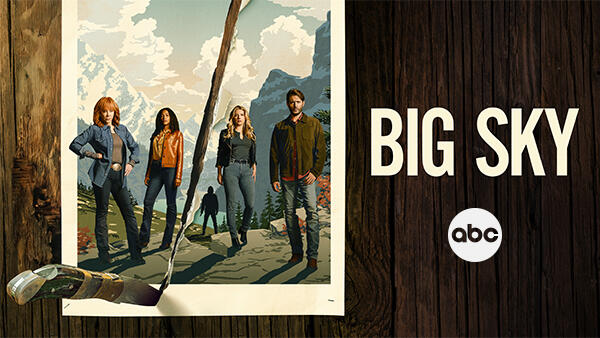 Though the premise of each series is quite different, both Yellowstone and Big Sky are set against the breathtakingly beautiful backdrop of Montana’s majestic mountains…and they’re both chock full of crime.

If you’re a fan of procedural shows, you’ll love Big Sky. In this ABC crime drama, two private detectives and an ex-cop set out to find two sisters kidnapped by a truck driver on a desolate north-western highway. 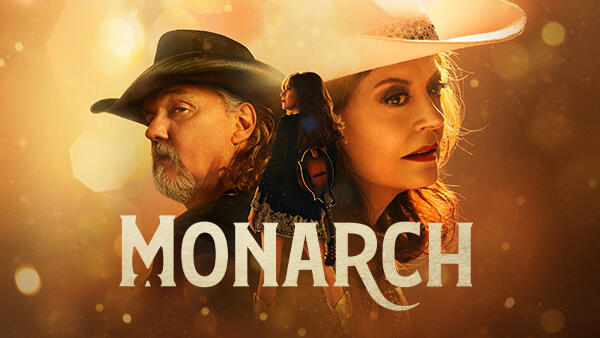 Monarch is a music industry drama surrounding the Romans—America’s first family of country music. While they’ve been able to maintain a squeaky clean image for generations, the Roman legacy is in jeopardy when the dark secrets that built the family foundation begin to crack. Can the new up-and-coming generation save the Roman name before it’s too late?

Yellowstone isn’t the only series that’s back with a highly-anticipated new season. Check out our 2022 fall TV premieres guide for more of the network shows you’ve been waiting for.