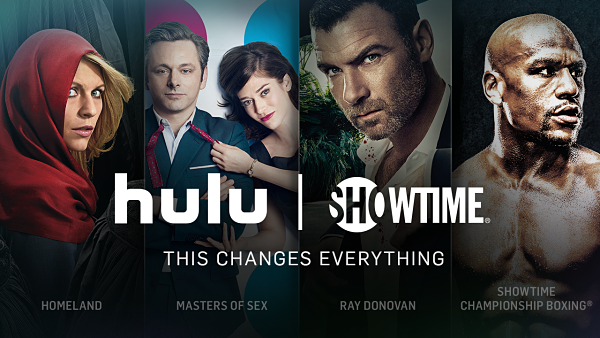 Today, we are excited to announce that SHOWTIME is available through Hulu for $8.99 per month in addition to $7.99 per month for your Hulu subscription. You can sign up for SHOWTIME here.

By adding SHOWTIME you’ll be able to have unlimited, on-demand access to award-winning SHOWTIME original series including the highly-anticipated July 12thseason premieres of the critically-acclaimed hit series RAY DONOVAN and MASTERS OF SEX, as well as HOMELAND, THE AFFAIR, PENNY DREADFUL, SHAMELESS, HOUSE OF LIES, NURSE JACKIE, HAPPYish, EPISODES and the anticipated new series BILLIONS and limited series TWIN PEAKS, all the same day and time they air. Box office hits, documentaries and specials are also available. You’ll also be able to watch the east and west coast feeds of SHOWTIME live on Hulu.com. This is in addition to the more than 88,000 hours of content currently available on Hulu including current season programming, full libraries of popular shows and new Hulu Originals.

If you sign up for SHOWTIME through Hulu you’ll be able to stream programming through the Hulu app on Android devices (phones, tablets and TV devices), iOS devices (iPhone®, iPad® and iPod touch®), Apple TV®, Xbox One®, Nintendo® WiiTM and Wii UTM, Roku® players and Roku TV models, PlayStation 4 (PS4TM), PlayStation 3 (PS3TM), Amazon Fire TV and Fire TV Stick, Chromecast , and the latest LG, Samsung and Vizio televisions and LG, Samsung and Sony Blu-ray players, as well as online at Hulu.com with more devices coming in the future. Hulu offers SHOWTIME streaming on more devices than any other distributor over the internet.