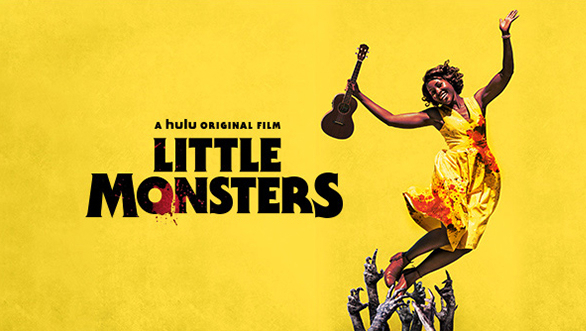 SANTA MONICA, CA (October 1, 2019) – A month’s worth of scary programming heads to Hulu with its annual “Huluween” celebration starting today. Viewers can head to Hulu’s personalized, Halloween-themed hub for a bone-chilling selection of popular Halloween TV episodes and movies, featuring 800 premium Halloween titles and more than 5,000 episodes of new and library TV series. The curated experience will also bring fans exclusive, new content throughout the month, including seven spooky short films from up-and-coming filmmakers, selected in collaboration with Sundance Institute, and the premieres of returning Original series Castle Rock, Light as a Feather, and Into the Dark and the highly anticipated Hulu Original Films Little Monsters and Wounds.

After the success of Huluween 2018, Hulu continues to engage with top advertisers in unique ways during the Halloween month, nearly doubling the number of advertisers participating in Huluween this year vs. 2018. With over 75% viewer engagement with the Huluween hub in 2018, brands sponsoring Huluween saw over 155% increase in ad recall and over 305% increase in purchase intent in 2018. Marketers are back again this year with branded integrated spots and custom creative featured throughout the Huluween content, embracing the spooktacular audience herding to Hulu during Huluween. Viewers will see multiple brands from Papa John’s to CarMax, among others, solidifying Hulu as the only premium streaming platform that can partner with multiple top brands in ways that are more personalized and immersive than anything on linear television.
Hulu Launches A Creepy Content Hub and Annual Huluween Film Fest
With content from all zombie walks of life, Hulu will have new and fan-favorite Halloween TV shows and films available for viewers all 31 days and nights of October. The immersive Huluween destination on the platform will have something for everyone, offering customized experience for consumers to add their favorite scary shows and monstrous movies to “My Stuff”. The Huluween hub will also serve consumers personalized recommendations all month long from hand-picked Halloween collections including Freaky Franchises, Foreign Frights, Psychological Horror & Thrillers, Sci-Fi Scares, Indies, Zombies, Humorous Horror, Anthologies, alongside Hulu Originals and Huluween Essentials.

Hulu is also bringing back the popular Huluween Film Fest, which will give seven up-and-coming filmmakers the opportunity to showcase their horror-themed short films on Hulu throughout the month. Collaboratively curated with the Sundance Film Institute, the short films, including – Hidden Mother, Ride, Swiped to Death, Flagged, Undo, The Dunes and The Ripper – will premiere today, Tuesday, Oct. 1 in conjunction with the Huluween experience and on Hulu’s social channels. The filmmaker with the highest level of engagement on Hulu and Hulu’s YouTube channel will win $50,000 towards production of their feature length film. To view all of Huluween short films, visit www.youtube.com/hulu.

This week, Hulu and Blumhouse Television returns with the  year-round horror event Hulu Original Series, Into The Dark with a special Halloween episode, Uncanny Annie. Launching October 4, the episode follows a group of college students who get trapped in a mysterious board game that brings their darkest secrets and fears to life, where they must play to escape… and win to survive.

Hulu Original Series Light As A Feather, produced by AwesomenessTV, Wattpad and Grammnet, also returns to the service October 4. Doubling down by playing a new round of “Light as a Feather” putting all their lives on the line, Season 2 continues as McKenna and friends are optimistic that they’re finally done with the curse. But is the curse done with them?
Hulu Original Film Little Monsters makes its streaming premiere on Friday, October 11. Starring Academy Award-Winning actress Lupita Nyong’o, Josh Gad and Alexander England, the critically-acclaimed Australian horror comedy begins with a harmless school field trip which ends with a zombie outbreak. Little Monsters world-premiered at the 2019 Sundance Film Festival.

Written and Directed by Under The Shadow’s Babak Anvari, Wounds streams on Hulu on October 18.  The feature film follows the story of a New Orleans bartender whose life begins to unravel after a series of disturbing and inexplicable events that begin to happen to him after picking up a phone left behind at a bar.  With a star studded cast including Armie Hammer, Dakota Johnson and Zazie Beets, Wounds also made its world premiere at the Sundance Film Festival in January 2019 followed by a screening at the Cannes Film Festival in May 2019.

Lastly, Zomboat!, a zombie-horror-comedy import, will premiere on Friday, October 25 in co-production with iTV. The series features a pair of sisters as they escape the apocalypse with the help of Dorothy, an early-80’s wood paneled canal boat.

About Hulu
Hulu is the leading premium streaming service offering live and on-demand TV and movies, with and without commercials, both in and outside the home. Launched in 2008, Hulu is the only service that gives viewers instant access to current shows from every major U.S. broadcast network; libraries of hit TV series and films; and acclaimed Hulu Originals like Emmy® and Golden Globe Award-winning series The Handmaid’s Tale, Emmy® Award-nominated series including The Looming Tower, The Act, Catch-22, Castle Rock, and Pen15 alongside hit series Marvel’s Runaways, Ramy, Shrill and Oscar® and Emmy®-nominated documentary film Minding the Gap. The service also streams live news, entertainment and sports from 21st Century Fox, The Walt Disney Company, NBCUniversal, CBS Corporation, The CW, Turner Networks, A+E Networks and Discovery Networks – available all in one place. Upcoming Hulu Originals include Little Fires Everywhere from Reese Witherspoon and Kerry Washington and The Dropout based on the ABC News investigative podcast and starring Kate McKinnon.
# # #
Hulu Contact
Nikki Suseck
nikki.suseck@hulu.com
For Press Materials:  http://www.hulu.com/press