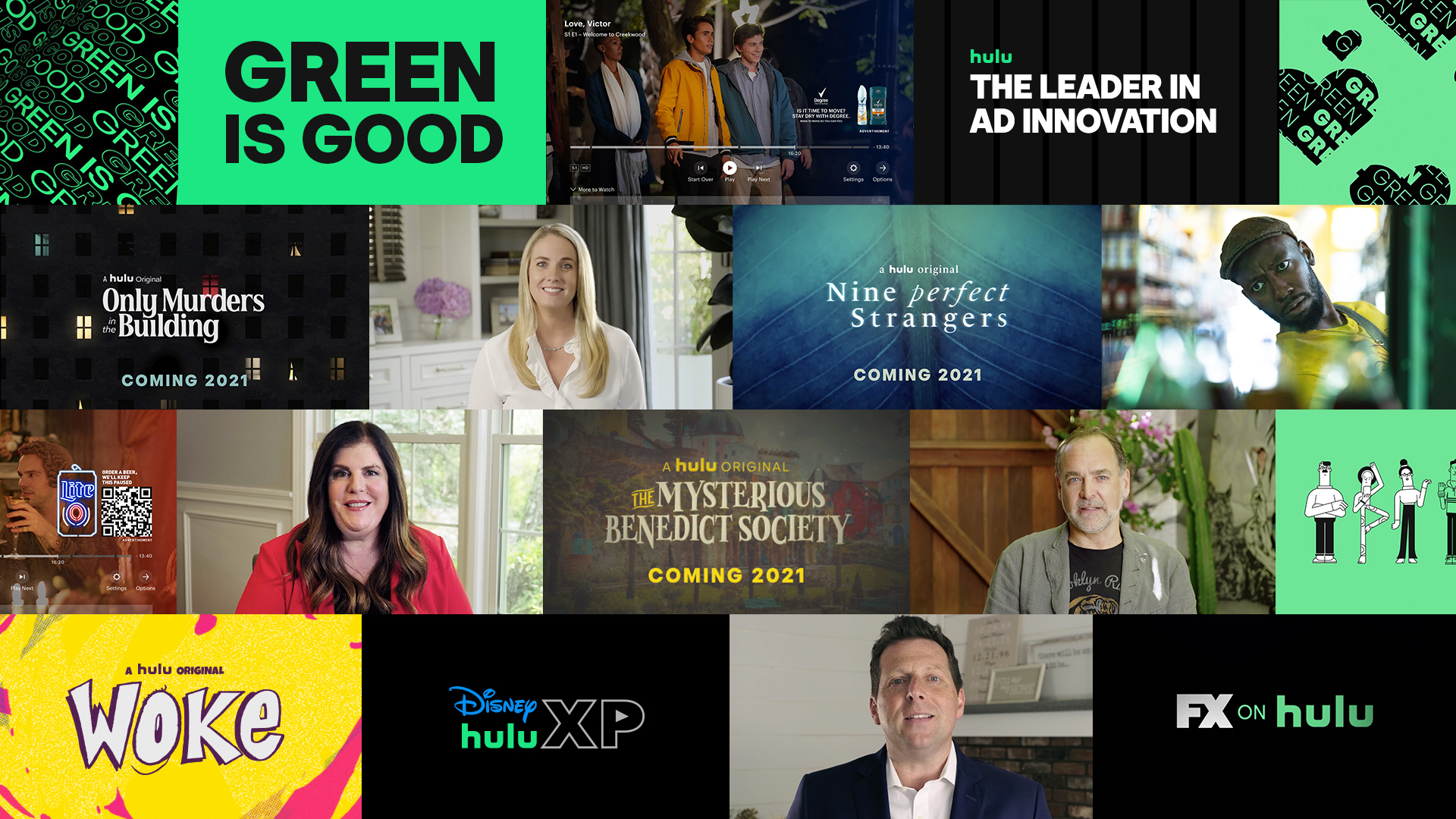 With the help of Hulu and FX on Hulu Original talent, Hulu President Kelly Campbell, Disney Advertising Sales President Rita Ferro, and other senior company executives spoke to Hulu’s powerful position in the industry as the first and largest premium ad-supported streaming TV platform, and the results that Hulu and Disney combined sales capabilities can deliver for advertisers.

“Streaming is leading one of the most profound consumer behavior shifts in history. For advertisers, Streaming TV is no longer a ‘nice-to-have’ or ‘a place to test and learn.’ It’s a must have, and it will redefine advertising in the same way that search did twenty years ago,” said Kelly Campbell, President of Hulu. “Hulu is proven in this space and was made for this very moment: we have the experience, the storytelling, the data and the scale to put television budgets to work, help brands connect authentically with audiences and drive results.”

“We pride ourselves on being home to the best Sports, Entertainment, and Streaming TV brands in the business and have the unique ability to deliver both massive scale and specific audience targets,” said Rita Ferro, President, Advertising Sales, The Walt Disney Company.  “Now, as one platform under Disney Advertising Sales, we have the most powerful capabilities to connect our clients to Generation Stream and to deliver unmatched results across every category.”

Below are the key announcements and highlighted original series from today’s Hulu Newfront:

As a top destination for viewers and brands with a deep understanding of the streaming audience, Hulu unveiled its latest insights about Generation Stream.

Generation Stream is defined as a multigenerational group and crosses all age, race, and gender bounds – they’re connected by a common behavior – streaming.  Hulu embarked on a multi-faceted behavioral study, titled Generation Stream, to better understand the attitudes and motivations of the viewers who are reshaping how we watch TV and shared preliminary data of the study. Early findings include:

Hulu continues to give viewers choice and control over their ad experience and unveiled its new viewer-first advertising format, GatewayGo, during today’s Newfront presentation.

GatewayGo joins Disney’s suite of advertising offering, and marries traditional TV ads with new, action-oriented prompts and offers to create immediate connections between viewers and advertisers.  It uses second screen technologies, like QR codes and push notifications, for viewers to take immediate action on a brand’s offer on their mobile device.

Based on behavioral data, survey results show that 6 out of 10 viewers would likely consider purchasing from the brand after redeeming an offer and nearly 50% of viewers claim to have their phones with them on the couch watching TV.  SmileDirectClub, The RealReal and Sweetgreen are among Hulu’s exclusive launch partners for this new experience.

As TV reach increases and brands look to find the best way to plan against the Generation Stream audience, Hulu announced today the integration of Nielsen Media Impact. With Nielsen Media Impact, marketers now have the opportunity to see exactly what kind of reach they can expect against their ad spend across the Disney Advertising Sales platform.

On the heels of successful dramas Little Fires Everywhere and Normal People, Hulu continues to deliver awe inspiring dramatic stories with the addition of Dopesick and The Mysterious Benedict Society. The two join previously announced new series including Nine Perfect Strangers and The Dropout:

Launched in early March, FX on Hulu is the dedicated content hub that brings together more than 40 of FX Networks’ acclaimed and award-winning current and legacy series, features over 1,600 episodes and includes Hulu exclusive FX originals. Since launch, over 50% of Hulu subscribers have engaged with FX on Hulu and the content hub has expanded FX’s reach by 130%.  Upcoming originals include:

Returning for a trilogy, Huluween streams this Fall with even more chilling Hulu Originals. After viewers watched 6.2 billion minutes of Halloween content in 2019, October continues to be a high-engagement driver for Hulu. Brands are also reaping the benefits, as marketers that partner with Hulu during Huluween have seen a +55% increase in ad recall and an 80% increase in brand association. Brand-new Hulu Originals featured in Huluween this year include:

The Dropout is executive produced by Kate McKinnon, showrunner Liz Meriwether and the producing team behind the ABC News podcast, host and Chief Business, Technology and Economics Correspondent for ABC News Rebecca Jarvis, Taylor Dunn and Victoria Thompson. The series comes to Hulu from Fox Searchlight Television and TCFTV.

Only Murders in the Building:

Only Murders in the Building hails from co-creators and writers, Steve Martin and John Hoffman (Grace & Frankie, Looking).  Martin and Hoffman executive produce along with This is Us creator Dan Fogelman, Jess Rosenthal (This is Us) and Martin Short. The series is a production of 20th Century Fox Television.

Solar Opposites is co-created by Justin Roiland and Mike McMahan. The executive producers and writers are Roiland, McMahan and Josh Bycel. 20th Century Fox Television serves as the studio.

Bad Hair is written and directed by Justin Simien. Simien also serves as a producer alongside Julia Lebedev, Angel Lopez, and Eddie Vaisman. Executive Producers include Leonid Lebedev, Oren Moverman, and Alex G. Scott. The film is produced by Sight Unseen in association with Culture Machine.

Hulu is the leading premium streaming service offering live and on-demand TV and movies, with and without commercials, both in and outside the home. Launched in 2008, Hulu is the only service that gives viewers instant access to current shows from every major U.S. broadcast network; libraries of hit TV series and films; and acclaimed Hulu Originals like Emmy® and Golden Globe Award-winning series The Handmaid’s Tale and The Act, Peabody and Golden Globe Award-winning series Ramy, Emmy® Award-nominated series including The Looming Tower, Catch-22, Castle Rock, and Pen15 alongside hit series Marvel’s Runaways, Dollface, Shrill and Oscar® and Emmy®-nominated documentary film Minding the Gap. The service also streams live news, entertainment and sports from 21st Century Fox, The Walt Disney Company, NBCUniversal, CBS Corporation, The CW, Turner Networks, A+E Networks and Discovery Networks – available all in one place. Recent hit Hulu Originals include Little Fires Everywhere from Reese Witherspoon and Kerry Washington, the TV adaptation of best-selling novel Normal People and comedy series The Great. Upcoming Original releases include The Dropout based on the ABC News investigative podcast and starring Kate McKinnon and the book to screen adaptation of Nine Perfect Strangers starring Nicole Kidman and Melissa McCarthy.