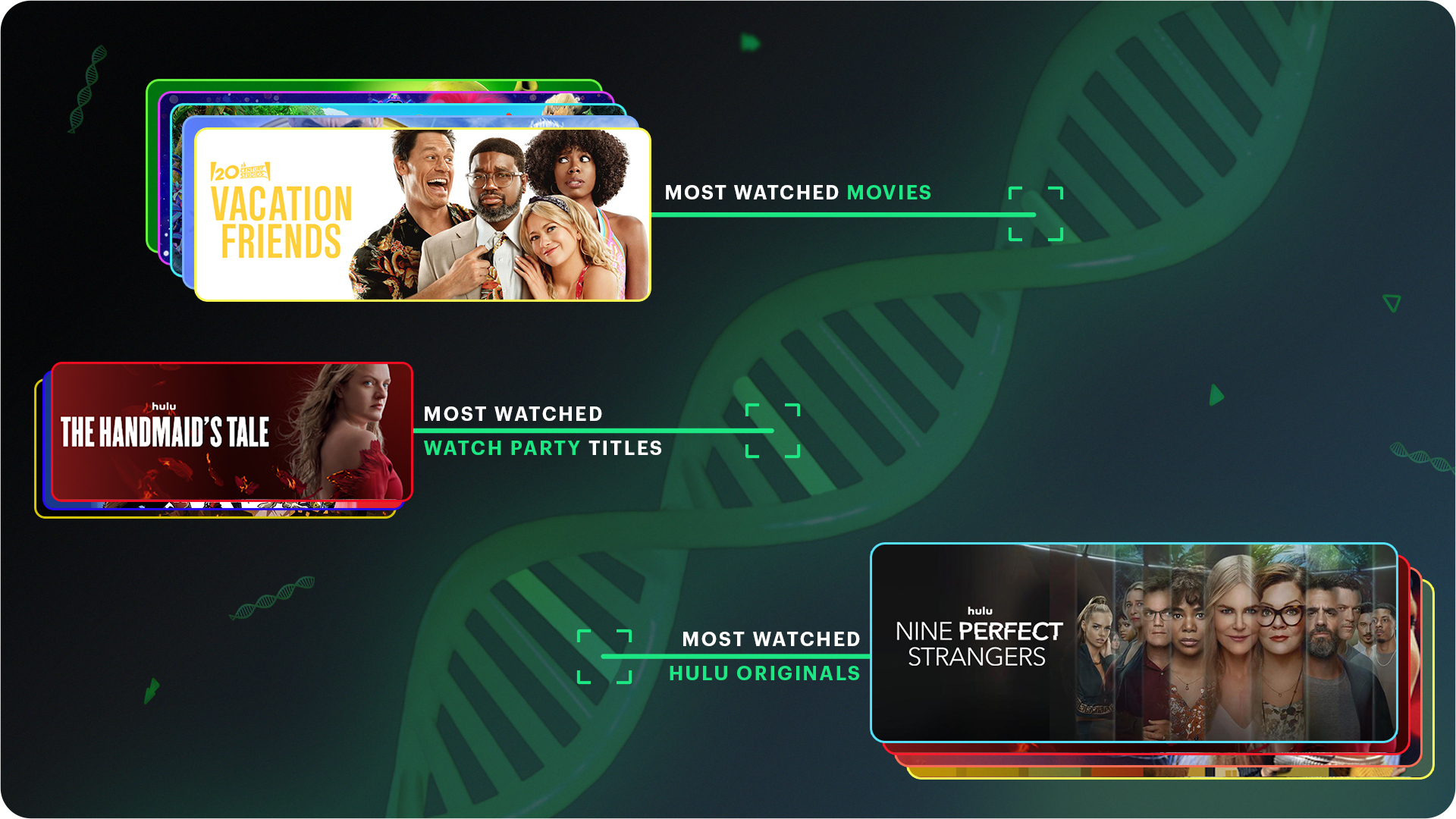 Hulu Offers Subscribers the Opportunity to Request to See Their Viewing DNA, and Shares Insights Into Overall Trends on the Platform

While we may have left sourdough bread, big cat sanctuaries, and whipped coffee in 2020, at least one thing remained strong through 2021 – Hulu subscribers’ love of streaming their favorite TV shows and movies.  Whether on the hunt for an escape from daily life (a trip to the healing retreat Tranquillum, perhaps), an unexpected adventure with that fun couple you met on vacation, or a murder mystery that can only be solved by a couple of the world’s most beloved comedians and one international pop star (no party poopers here), Hulu proved to be the go-to destination to satisfy any pop culture craving.

IT’S IN YOUR DNA

This year, for the first time, Hulu is giving subscribers the opportunity to request to see their own viewing DNA and the tools to proudly share, should they so choose, their streaming persona – “Hu” are you?? Starting today, subscribers can visit YourTVDNA.com and request to see their personalized Hulu viewing habits throughout 2021, breaking down everything from their most watched genres to how many films and episodes they streamed. TV genes never looked so stylish.

It’s been a historic year for Hulu Originals with Only Murders in the Building becoming Hulu’s most-watched comedy series, The D’Amelio Show becoming the most-watched unscripted series and Nine Perfect Strangers setting a new record as Hulu’s most-watched series EVER!  In fact, Hulu Originals dominated this year’s overall viewing hours, with Nine Perfect Strangers, Only Murders in the Building, The Handmaid’s Tale, and The New York Times Presents ‘Framing Britney Spears’ taking 19 of the top 20 most watched episodes slots.  Zooming in further on the passion in our subscribers’ DNA, they spent the most hours watching Season 4, Episode 3 of The Handmaid’s Tale, making this the most-watched episode of any original this year, and it just happened to be star Elisabeth Moss’s directorial debut!

Always a staple among Hulu viewers, adult animation was the #1 genre based on hours watched.  And the laughs didn’t end there.  The most streamed day of 2021 was Sunday, January 31, in part because of subscribers waking up to watch the previous evening’s Saturday Night Live episode hosted by John Krasinski.  Who wouldn’t want to start their day with that guy?? Other subscribers  that day had their eye on the links, logging in to check out golf’s finest at the Farmers Insurance Open on the PGA Tour.

Movies filled with fantasy and furry friends were especially popular this year, with Shrek (celebrating its 20th anniversary in April), Sonic the Hedgehog, The Croods: A New Age, and Trolls World Tour filling some of Hulu’s top movie slots.  Rounding out the list was Vacation Friends, which broke through as Hulu’s most watched Original film in its opening weekend.  With a sequel already in the works, we’re sensing good things for the future.

Four of our top 10 Live programs in 2021 were dedicated to sports: NFL, College Football, SportsCenter and MLB together accounted for the majority of Live hours watched. Once again, pro football reigned supreme this year, with Super Bowl LV: Chiefs vs. Buccaneers as the top live-streamed sports event.

Our most watched medical drama was The Good Doctor, which also topped this category in 2020.